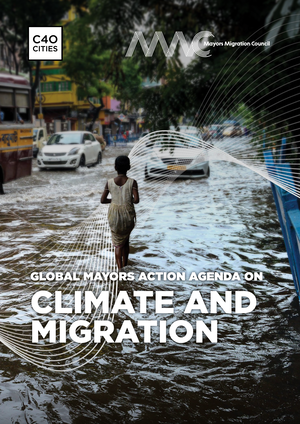 Climate migration and displacement are a reality today. Sea-level rise, crop failures, and record temperatures will drive an unprecedented movement of people. According to a World Bank report, by 2050, climate impacts could force more than 200 million people to move within their countries across six regions. Globally, it is estimated that up to a billion people could be driven from their homes within the next 30 years – less than half a lifetime. If this happens, human civilization will not have experienced migration on such a scale in its history.

It is likely that those who leave their homes will settle in cities, which are already the primary destination of international and internal migrants and home to 70 percent of the world’s refugees, internally displaced persons, and stateless people.

In response, C40 Cities (C40) and the Mayors Migration Council (MMC) established the Global Mayors Task Force on Climate and Migration. Guided by the mayors of Barcelona, Bristol, Dakar, Dhaka North, Freetown, Houston, Los Angeles, Lima, and Milan, the C40-MMC Task Force is a mayor-led initiative to accelerate local, national, regional, and global responses to the climate crisis and human mobility in cities.

The Global Mayors Action Agenda on Climate and Migration is the result of our work for presentation at the United Nations Climate Conference (COP26) in November 2021 in dialogue with national and regional counterparts.

This Action Agenda presents our approach to the complex links between climate and migration in our cities. It presents the principles that guide our approach, actions we need global and international partners to take with us, and areas where we are already leading by example.