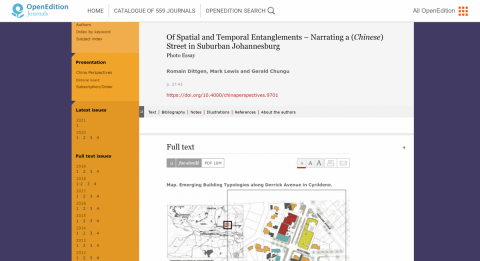 Up until the early 1990s, Derrick Avenue was largely characterised by Jewish, and to a lesser extent, Greek residents as well as related spatial markers. The street has since then attracted more and more Chinese migrants. With the advent of democratic elections in 1994, concerns about political uncertainty, and rising crime rates, many of the initial dwellers decided to move out of the neighbourhood, either to more affluent parts of Johannesburg or overseas, opening up a large supply in available accommodation possibilities. The arrival of new residents, initially Taiwanese, who were then joined and gradually overtaken by other Chinese (lured by business opportunities in trade), also resulted in material changes along the street.

The authors' aim is not to disregard the existence of difference, but to consider how Derrick Avenue as a space exists as an integral part of city-making processes and realities. In this context, the articulation between unique and common then ceases to be binary and emerges as an entanglement of urban complexities. The selection of images featured in this essay offers a glimpse of these multiple trajectories, time frames, and imaginations that converge within this street.