UN Network on Migration in the Maldives Formally Launched 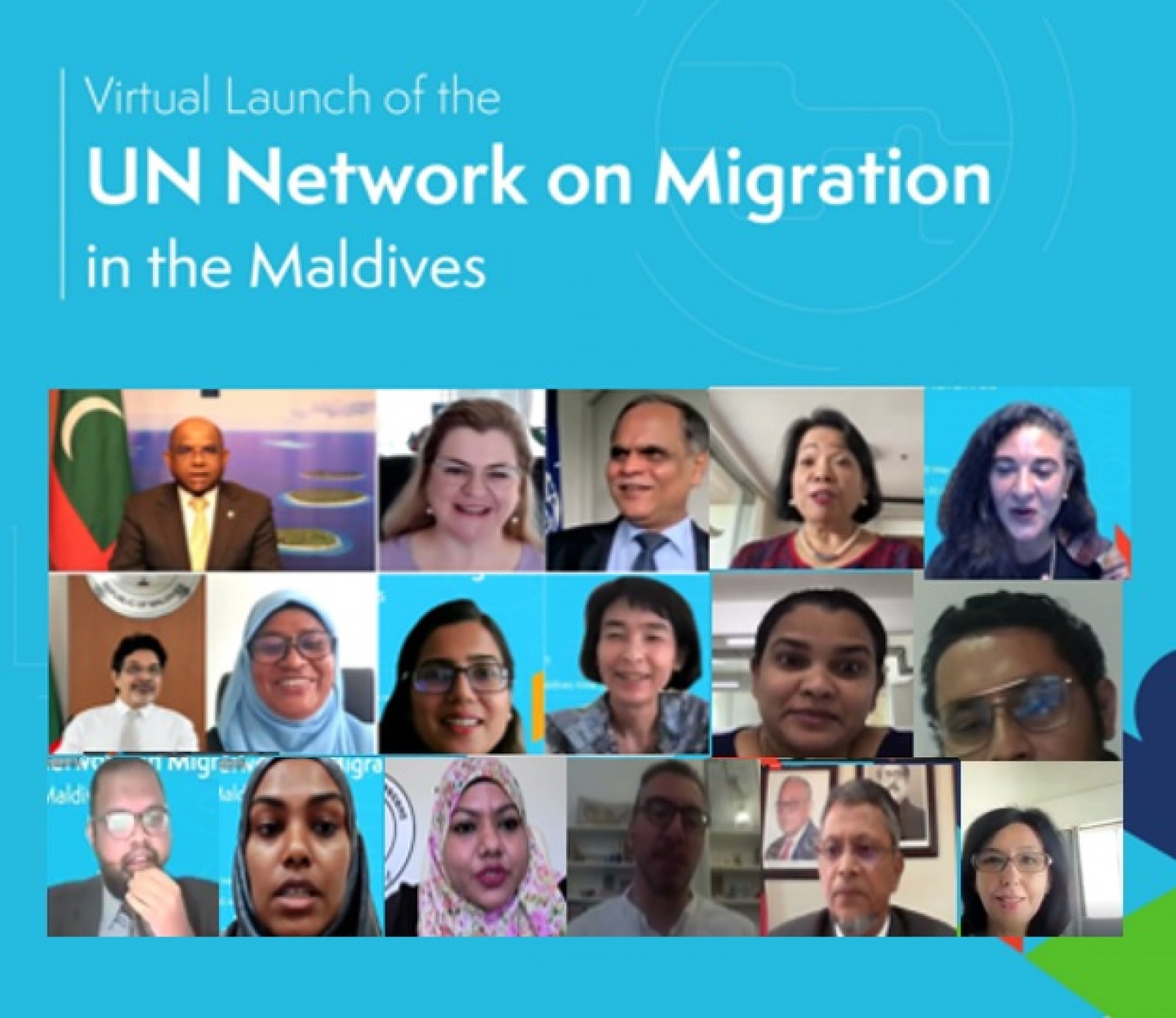 Male’ – The UN Network on Migration in the Maldives (hereinafter referred as “the Network”) was formally launched virtually today (31 May 2021) by the International Organization for Migration (IOM), the UN Resident Coordinator and, UN entities in partnership with the Government of Maldives (GoM). Foreign Secretary H.E. Abdul Ghafoor Mohamed officiated as the chief guest.

The overall aim of the Network is to facilitate effective, timely and coordinated UN system-wide actions supporting the GoM in implementing the Global Compact for Safe, Orderly and Regular Migration (GCM), in accordance with the national priorities.

“Protecting the human rights of migrants is essential to Maldives’ socio-economic development, while securing the well-being of all its residents. With the launching of the UN Network on Migration, the audience can expect a strong, united and efficient response from the global UN family. An effective migration approach is a key element, particularly for a small country with big economic ambitions, in all policy making and efforts towards achieving sustainable development.” said UN Resident Coordinator (UNRC) Catherine Haswell during her opening remarks at the launch.

The Maldives has the largest proportional population of migrants in South Asia, with roughly 200,000 to 250,000 international migrants, constituting roughly one third of the resident population.

Undocumented migrants in the Maldives are an increasingly vulnerable and marginalized population, with issues ranging from labour exploitation, trafficking, access to health and other basic rights, discrimination, and social stigma. The COVID-19 pandemic has further highlighted underlying challenges.

In 2018, the Maldives supported the United Nations General Assembly resolution 73/195 endorsing the GCM as a multilateral framework that complements its national development commitments. The GoM actively contributed to the consultations during the development process of the GCM, and since then has continued its expressed interest towards the implementation, follow-up and review.

“The complexities of international migration are very real. No single country can find solutions to these shared challenges. International cooperation is the way forward…We look forward to meaningful engagement within the UN Network on Migration, which I believe will be a coordinated, collective, and collaborative force for good, one that values inclusivity and unity.” stated Minister of Foreign Affairs Abdulla Shahid in a video message shared during the event.

To mark the formal launch of the Network, two high-level panels were organized with representatives from the GoM, UN agencies and civil society. The first panel discussion highlighted the GCM country priority objectives, and the ongoing efforts to regularise migrant workers, voluntary return, data management and enforcing the guidelines on employer obligations towards migrant workers.

The second panel addressed the issue of human-trafficking and well-being of migrant workers. The need for sustained efforts to train and develop capacity of frontline workers in border management and law enforcement, expanding awareness on human-trafficking and forms of assistance available to the survivours of trafficking emerged as key themes. In this regard, panelists from the GoM also highlighted the recent establishment of the Anti-Trafficking in Persons Office (TIP) and the work of National Anti-Human Trafficking Steering Committee (NAHTSC), as key to achieving better multi-agency coordination, and welcomed the continued support of the Network.

Under the aegis of the UNRC, IOM serves as the Coordinator and Secretariat of all constituent parts of the Network.

“I am positive that this launch event will create awareness about the UN Network on Migration in the Maldives among all relevant stakeholders,” said Sarat Dash, Coordinator of the Network in the Maldives and IOM Chief of Mission for Sri Lanka and Maldives.

While the Network is officially launched now, it has been active since July 2020. So far, 50 country Networks have been established around the world. The Network in the Maldives represents seventh in the Asia-Pacific region, joining Bangladesh, Timor-Leste, Philippines, Cambodia, Thailand and Sri Lanka.

The video produced by the Network in the Maldives for the launch can be accessed here: https://twitter.com/IOMAsiaPacific/status/1399276688505131009

For more information, please contact the Secretariat of the UN Network on Migration in the Maldives: Tabassum Mokhduma, Project Officer, IOM Maldives at Tel: +9669608909, Email: tmokhduma@iom.int or IOM Maldives at Email: iommale@iom.int