The Curse of the Nation-State: Refugees, Migration, and Security in International Law

The Curse of the Nation-State: Refugees, Migration, and Security in International Law 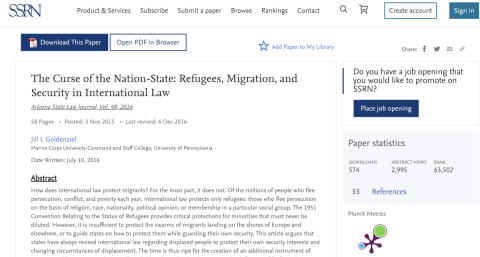 How does international law protect migrants? For the most part, it does not. Of the millions of people who flee persecution, conflict, and poverty each year, international law protects only refugees: those who flee persecution on the basis of religion, race, nationality, political opinion, or membership in a particular social group. The 1951 Convention Relating to the Status of Refugees provides critical protections for minorities that must never be diluted. However, it is insufficient to protect the swarms of migrants landing on the shores of Europe and elsewhere, or to guide states on how to protect them while guarding their own security. This article argues that states have always revised international law regarding displaced people to protect their own security interests and changing circumstances of displacement. The time is thus ripe for the creation of an additional instrument of international law to protect the 35 million displaced people who do not meet the definition of “refugee.” To support this argument, this article presents a comprehensive history of refugees in international law, combining primary sources and original interview data to trace how states have used refugee law to protect minority rights, even as state security interests have changed refugee protection over time. In doing so, the article makes two theoretical claims that contribute to growing scholarly interest in the history of human rights law. First, the article argues that refugee law is paradigmatic human rights law, although it is often excluded from the human rights canon. Second, the article claims that refugee law predates the modern human rights regime, challenges its foundations, and extends its claims to universality.