Morally evaluating human smuggling: the case of migration to Europe

Morally evaluating human smuggling: the case of migration to Europe 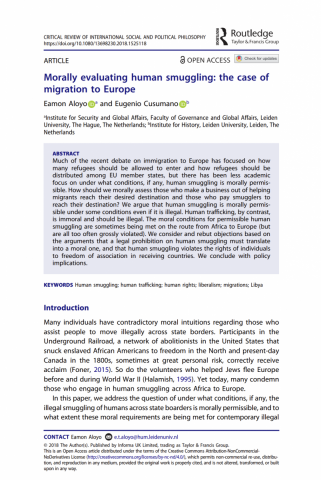 Much of the recent debate on immigration to Europe has focused on how many refugees should be allowed to enter and how refugees should be distributed among EU member states, but there has been less academic focus on under what conditions, if any, human smuggling is morally permissible. How should we morally assess those who make a business out of helping migrants reach their desired destination and those who pay smugglers to reach their destination? We argue that human smuggling is morally permissible under some conditions even if it is illegal. Human trafficking, by contrast, is immoral and should be illegal. The moral conditions for permissible human smuggling are sometimes being met on the route from Africa to Europe (but are all too often grossly violated). We consider and rebut objections based on the arguments that a legal prohibition on human smuggling must translate into a moral one, and that human smuggling violates the rights of individuals to freedom of association in receiving countries. We conclude with policy implications.