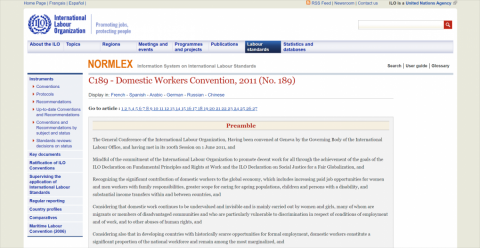 The Convention concerning Decent Work for Domestic Workers was adopted during the 100th session of the International Labour Organization in 2011 and entered into force in 2013. It sets labour standards for domestic workers and makes special mention to women and girls, as well as migrants and members of disadvantaged communities as the main demographic in this sector. The Convention text is available in Arabic, Chinese, French, Russian, Spanish, English, and German.