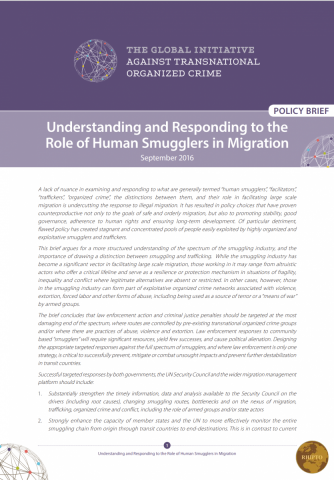 This brief argues for a more structured understanding of the spectrum of the smuggling industry, and the importance of drawing a distinction between smuggling and trafficking. While the smuggling industry has become a significant vector in facilitating large scale migration, those working in it may range from altruistic actors who offer a critical lifeline and serve as a resilience or protection mechanism in situations of fragility, inequality and conflict where legitimate alternatives are absent or restricted. In other cases, however, those in the smuggling industry can form part of exploitative organized crime networks associated with violence, extortion, forced labor and other forms of abuse, including being used as a source of terror or a “means of war” by armed groups.