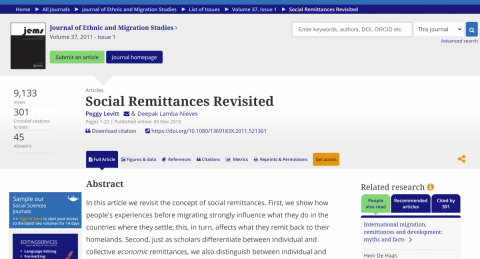 In this article, the concept of social remittances is revisted. First, the authors show how people's experiences before migrating strongly influence what they do in the countries where they settle; this, in turn, affects what they remit back to their homelands. Second, just as scholars differentiate between individual and collective economic remittances, the authors also distinguish between individual and collective social remittances. While individuals communicate ideas and practices to each other in their roles as friends, family members or neighbours, they also communicate in their capacity as organisational actors, which has implications for organisational management and capacity-building. Finally, the authors argue that social remittances can scale up from local-level impacts to affect regional and national change and scale out to affect other domains of practice.