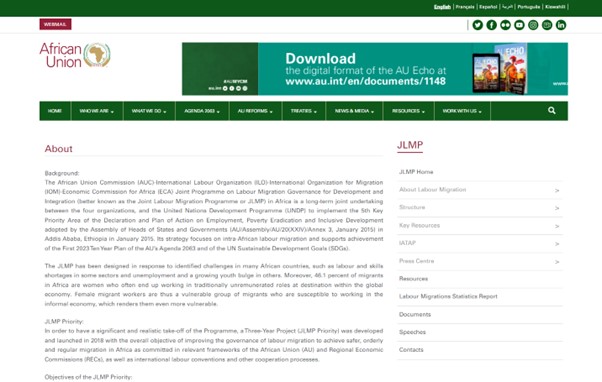 The African Union Commission (AUC)-International Labour Organization (ILO)-International Organization for Migration (IOM)-Economic Commission for Africa (ECA) Joint Programme on Labour Migration Governance for Development and Integration (better known as the Joint Labour Migration Programme or JLMP) in Africa is a long-term joint undertaking between the four organizations, and the United Nations Development Programme (UNDP) to implement the 5th Key Priority Area of the Declaration and Plan of Action on Employment, Poverty Eradication and Inclusive Development adopted by the Assembly of Heads of States and Governments (AU/Assembly/AU/20(XXIV)/Annex 3, January 2015) in Addis Ababa, Ethiopia in January 2015. Its strategy focuses on intra-African labour migration and supports achievement of the First 2023 Ten Year Plan of the AU’s Agenda 2063 and of the UN Sustainable Development Goals (SDGs).

The JLMP has been designed in response to identified challenges in many African countries, such as labour and skills shortages in some sectors and unemployment and a growing youth bulge in others. Moreover, 46.1 percent of migrants in Africa are women who often end up working in traditionally unremunerated roles at destination within the global economy. Female migrant workers are thus a vulnerable group of migrants who are susceptible to working in the informal economy, which renders them even more vulnerable.