Manufacturing Smugglers: From Irregular to Clandestine Mobility in the Sahara 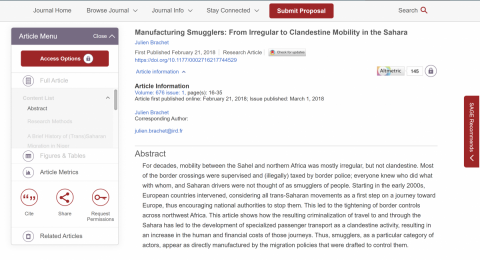 For decades, mobility between the Sahel and northern Africa was mostly irregular, but not clandestine. Most of the border crossings were supervised and (illegally) taxed by border police; everyone knew who did what with whom, and Saharan drivers were not thought of as smugglers of people. Starting in the early 2000s, European countries intervened, considering all trans-Saharan movements as a first step on a journey toward Europe, thus encouraging national authorities to stop them. This led to the tightening of border controls across northwest Africa. This article shows how the resulting criminalization of travel to and through the Sahara has led to the development of specialized passenger transport as a clandestine activity, resulting in an increase in the human and financial costs of those journeys. Thus, smugglers, as a particular category of actors, appear as directly manufactured by the migration policies that were drafted to control them.